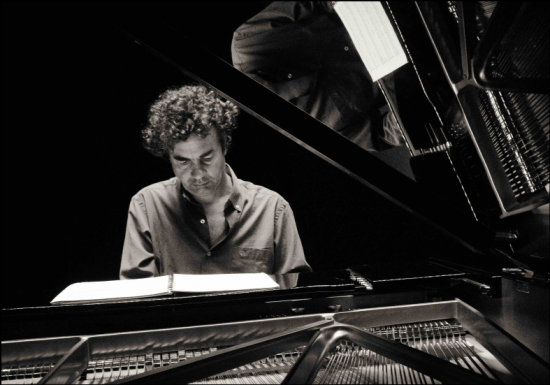 Duo (piano, violin) and trio (piano, violin, bandoneon) available in 2022/2023
Composer and pianist, born in 1963 in Buenos Aires where he studied music at the Dopolito Conservatory and refined his style alongside pianist Alberto Mercanti. He conducted in Opera companies, joined classical and contemporary music bands, as well as Argentinian folklore and tango ones. At his arrival in France in 1992, he met the violinist Iacob Maciuca and other musicians coming from Eastern European countries, giving him that fundamental influence on his very own language of musical arrangement. He formed different bands, such as the 'Cuarteto Jerez', 'Translave', and more recently, his quartet, the 'Jerez Le Cam Quartet'.
As a musician, he performs, among other things, with Juan José Mosalini, Raul Barboza, Gotan Project, Julia Miguenes, Sandra Rumolino, Raul Garelo, Tomas Gubitsch, Osvaldo Calo, French symphony orchestras from the Loire region and the region of Paris, Ile de France. His last creations: 'Barok Tango' and 'Tangos para Bach', 'Sonatas Tangueras' and 'Raices', musical arrangements for French orchestras, 'Cantatas Immigrantes' for the choir and orchestra of L’Aria de Paris, 'Miniaturas Lunares' with baroque music singer Anne Magoüet in 2019, 'Balcanik Bach' in 2021.
His new album, 'Buenos Aires Esquinas y Fugas', recorded in trio with violonist Iacob Maciuca and bandoneonist Manu Comté, will be released in January 2022 by Label Ouest.

About his album 'Balcanik Bach':
"I have always wondered about the relationship between the daily life of Johan Sebastian Bach and the popular music of his time. This giant of musical creation of all time has drawn on European folk resources through his numerous trips, always inhabited by limitless curiosity. In complicity with Iacob Maciuca, who has allowed me to discover the culture of the Balkans since 1992, we approach a different point of view of the music of JS Bach. Through the various dances, we explore a path which communicates with the festive and popular spirit of the peoples of eastern Europe. Gypsy musicians, coming from the East, have succeeded in crossing admirably the different musical sources through their travels. meeting, which surprises us and brings us a unique joy, reflects the many possibilities of bridges between learned and popular music. "
http://jerezlecam.com/
https://www.facebook.com/jerezlecam