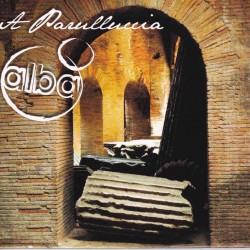 Rooted in the musical tradition of Corsica, L'Alba presents a sublime mix of goosebumps inducing traditional polyphonic style choral singing from France's Mediterranean outpost off the west coast of Italy and beautifully arranged and executed songs that are intimately linked to the island. Every instrumental and vocal note is seemingly carefully calculated and calibrated. The acoustic guitar and electric bass playing, which provides the bedrock of the songs, is exemplary.
An outstanding title track 'A Parulluccia' is embellished by the intricate accordion fills of the band's late Madagascan accordion ace Régis Gizavo. "Box" and electric bass in tandem brings the beautiful 'Sapppia Fratellu' to a high perfect conclusion. Italian guest Enza Pagliara's crystalline voice captivates on a mellow ballad, 'Tandu Qui', backed symbiotically by violin in low register. 'Lampedusa' manages to be both lively and poignant, the latter tone perhaps reflecting the Med island's refugees' quandary. However, it's the short a cappella songs 'Paghjella' and 'Sti Buchji Di Not' (the latter over a harmonium drone) and the intro to the song 'Spunnati Scaluni' showcasing the aforementioned polyphonic singing of Corsica that truly take the breath away. The slow moving harmonies and the contrasting parts combine to create a truly extraordinary listening experience.
Tony Hillier - Rhythms magazine - March/April 2018
The great Malagasy accordeonist Régis Gizavo died, far too young, on July 16th, 2017, in Corsica while touring as a member of this Corsican vocal and instrumental group. He's long had involvement with Corsican music, playing with another well-known group, I Muvrini, for eight years and appearing on six of their albums in the 1990s.
L'Alba, while featuring that soaring, melismatic Corsican male tenor singing, are also instrumentalists, using guitars, Indian harmonium, clarinet and bass guitar. Understandably, the band doesn't want to be trapped in the traditional format, but, while keeping that essence, aims for evolution and a wider musical palette. With most of the material their own, generally featuring a lead voice with the others as backing vocalists, it's a smooth, elegant, warm Mediterranean sound.
Perhaps, the most striking tracks, though, in international terms at least, are those with the glorious a cappella Corsican harmony is to the fore: 'Spunnati Scaluni', in which the voices stand before they're joined by Gizavo's accordeon, and the darkly droning closer, 'Sti Buchji Di Notti'.
Living on a Mediterranean island, it's impossible to be unaware of the tragic migrant boats, and, as far as I can tell as a non-Corsican speaker typing the lyrics into Google Translate, that seems to be alluded to in the song 'Lampindusa'. But perhaps not; while this is the band's debut album and the first time it's been released commercially, according to the press release it was recorded "a few years ago".
Andrew Cronshaw - fRoots magazine - April 2018
L'Alba "A Parulluccia"
I have to admit that I expected a Scottish connection with a band named Alba - but how wrong I was: L'Alba celebrates Corsican music and song traditions. The band's focus is on songs in Corsican language, many sounding slow, mournful and intense, with a fair few featuring polyphonic singing. Nevertheless there's something uplifting in the music - the songs are beautifully arranged with an interesting range of instruments, including clarinet, violin,various string instruments and accordion. The latter is played on the album by Madagascan accordionist Régis Gizavo who unfortunately passed away since the recording. The arrangements are contemporary and blend in a number of Mediterranean music traditions. This album is not exactly new - it was recorded a few years ago, but has now been re-released commercially.
Folk World 2018
http://www.folkworld.eu/67/e/cds2.html#alba